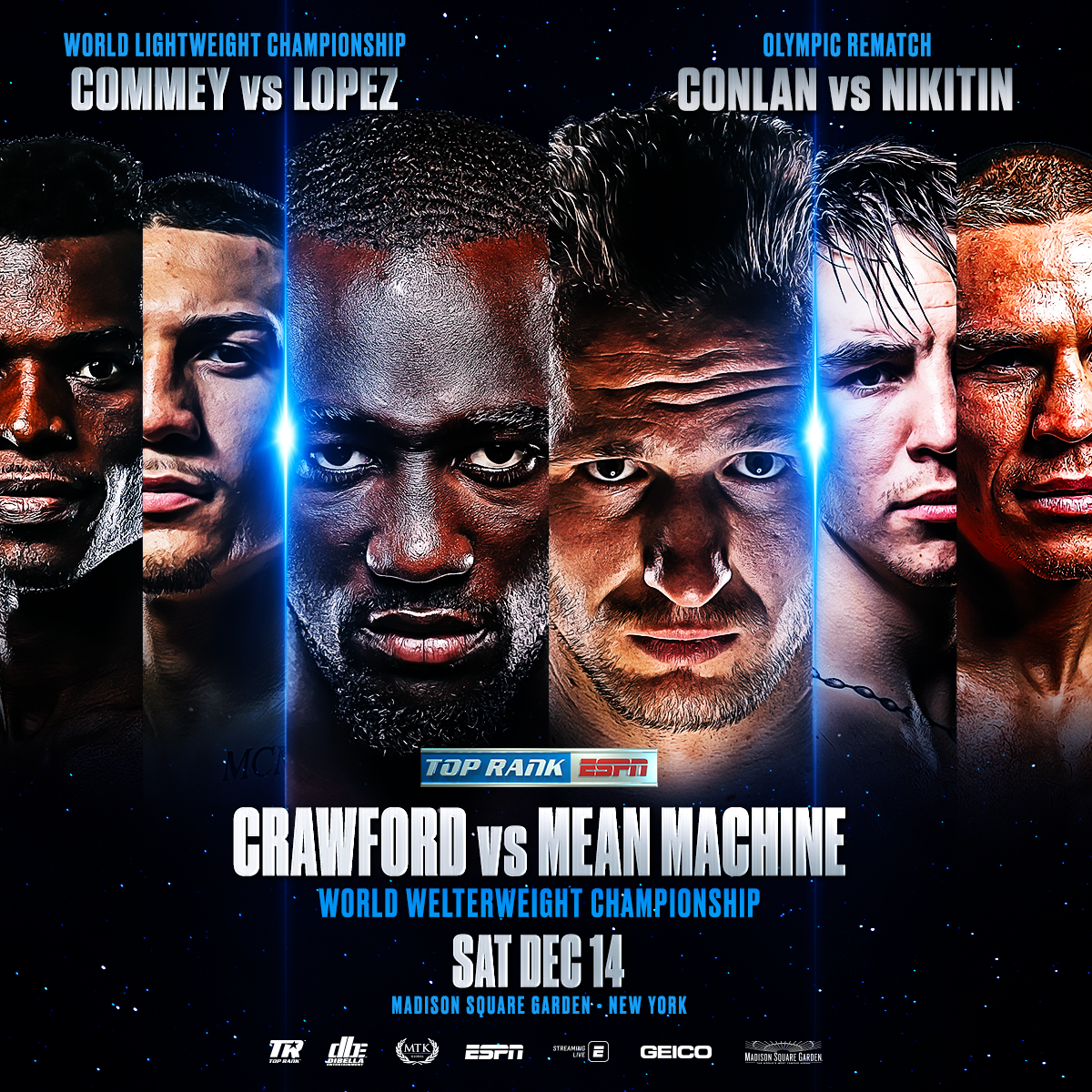 Promoted by Top Rank, in association with DiBella Entertainment and MTK Global, tickets priced at $506, $306, $206, $106 and $56 (not including applicable fees) go on sale Friday, October 18 at 12 p.m. ET and can be purchased at the Madison Square Garden Box Office, all Ticketmaster outlets, Ticketmaster charge by phone (866-858-0008) and online at www.ticketmaster.com or www.MSG.com.

The undercard, with fights to be announced in the coming weeks, will stream exclusively on ESPN+, the leading multi-sport streaming service, starting at 6 p.m. ET/3 p.m. PT.

“This is the best fight card of the year, and Madison Square Garden is a fitting venue for what will be a special night,” said Top Rank chairman Bob Arum. “Terence Crawford is a generational talent, but he’ll have his hands full against the ‘Mean Machine.’ Teofimo Lopez is taking a giant step up against Commey, and it will be a tremendous fight. Mick Conlan has been asking for Nikitin since the day he signed with Top Rank. He finally gets his wish, and I know he wants to correct the tremendous injustice of the Rio Olympics.”

“Egidijus Kavaliauskas is a two-time Olympian and I can’t take him lightly,” Crawford said. “He’s got everything to gain and nothing to lose and that makes him dangerous. I never overlook any opponent, and this will be no exception. I’ll be ready for anything and everything he brings on December 14 when I return to my second home, Madison Square Garden, and live on ESPN.”

“I have prepared my whole boxing career for a fight of this magnitude,” Kavaliauskas said. “Terence Crawford is an excellent fighter, but I fear no man. Nobody has seen the best of the ‘Mean Machine’ yet. I am going to shock a lot of people on December 14, but it won’t be a surprise to me. I earned this title shot. It is my time.”

Crawford (35-0, 26 KOs), the pride of Omaha, Nebraska, has been impeccable since turning professional, winning world titles in three weight classes and unifying all four major world titles at super lightweight. He is 13-0 with 10 knockouts in world title bouts and has knocked out his last six opponents, including Olympic gold medalist Felix Diaz, bitter rival Jose Benavidez Jr. and Manny Pacquiao conqueror Jeff “The Hornet” Horn. In his last bout, April 20 at Madison Square Garden, Crawford neutralized former unified super lightweight world champion Amir “King” Khan en route to a sixth-round TKO after Khan could not continue following a low blow. Kavaliauskas (21-0-1, 17 KOs) will be the fourth undefeated fighter Crawford has faced in his last five bouts.

A native of Kaunas, Lithuania, Kavaliauskas represented his homeland at the 2008 and 2012 Olympics, rising the professional ranks with convincing victories over perennial contenders Juan Carlos Abreu and Roberto Arriaza. Kavaliauskas has a February 2018 TKO win over David Avanesyan, who is now the current European welterweight champion. He has never been knocked down as a pro or amateur and trains out of the famed Boxing Laboratory in Oxnard, California.

Commey (29-2, 24 KOs) has had a career year, winning the vacant IBF lightweight title February 2 in Frisco, Texas with a devastating second-round TKO over Isa Chaniev. He defended the belt June 29, knocking down former lightweight world champion Ray Beltran down four times before stopping him in the eighth round. A native of, Accra, Ghana, he has won four in a row by knockout.

Lopez (14-0, 11 KOs), at 22 years old, is one of boxing’s budding superstars a big-punching, big-talking fighter who has become the sport’s latest viral sensation. His post-fight Fortnite celebrations and backflips are the exclamation point to his highlight-reel knockouts. He fought last year on the post-Heisman Trophy celebration telecast, knocking out Mason Menard in 44 seconds and then putting on the jersey of Heisman winner Kyler Murray. Lopez is 3-0 in 2019, most recently prevailing via 12-round decision July 19 over Japanese veteran Masayoshi Nakatani in a title eliminator.

“I’m very excited to fight at the Mecca of Boxing, Madison Square Garden, in my second world title defense against Teofimo Lopez,” Commey said. “My lifelong dream of becoming a world champion became a reality through many years of hard work in my homeland of Ghana through the UK, Europe and finally in the United States. I want to thank everyone on my team for making this possible. On December 14, I will put on another spectacular performance in defending my world title for my fans in the arena and those watching on ESPN and around the world.”

“Richard has fought all over the world for many years to achieve his lifelong dream of not only becoming a true world champion, but also becoming a boxing star, and on December 14 against Teofimo Lopez, I believe that he will successfully defend his title for the second time in spectacular fashion,” said Lou DiBella, Commey’s promoter.

“I’m finally back at Madison Square Garden, the place where I always wanted to win my first world title,” Lopez said. “I believe this fight will shut up all of the critics and prove to everyone that I back up my talking in the ring. I respect Commey as a champion, but when we’re in that ring, it’s going to be lights out for him. Come December 14, I am officially taking over the lightweight division.”

Conlan (12-0, 7 KOs), who is ranked in the top 10 as a featherweight by three of the major sanctioning organizations, is looking to avenge the final, and most controversial loss, of his amateur career. With a semifinal berth — and a guaranteed Olympic medal — on the line, Nikitin was the beneficiary of a decision most experts believe Conlan deserved. The indelible image of the Rio Olympics was Conlan’s double middle-finger salute to the judges. Conlan’s disappointment motivated him for what has been a flawless professional campaign. A proven ticket-seller at Madison Square Garden thanks to his annual St. Patrick’s Day appearances, Conlan is coming off a rousing TKO win over Diego Alberto Ruiz on August 3 in front of 10,000 hometown fans at Belfast’s Falls Park.

Nikitin (3-0, 0 KOs) did not turn pro immediately following the 2016 Olympics, electing to fight as an amateur throughout 2017. He signed a professional contract in 2018 with Top Rank, in large part because he wanted to face Conlan as a pro. Nikitin’s come-forward style has translated to the pro ranks, as he’s won a trio of decisions. He has fought on the same card as Conlan twice as a professional. The message was clear: Conlan and Nikitin were destined to meet again. They were supposed to fight August 3 at Falls Park, but Nikitin suffered a torn biceps in training.

“I’m beyond excited to fight for the sixth time in my favorite venue in the world, the Mecca of Boxing, Madison Square Garden,” Conlan said. “The boxing fans in New York City have been incredibly supportive of my career, and I look forward to putting on another great show for them, as well as my Irish fans coming over for this massive holiday event.

“Vladimir Nikitin and I have unfinished business from the 2016 Olympics, and I can’t wait until December 14 to set the record straight.”

“Michael Conlan has done a lot of talking about me and our Olympic fight over the last few years. The talking finally ends December 14,” Nikitin said. “He’s bitter over our last fight and can’t accept the result. Well, my hand will be raised once again.”