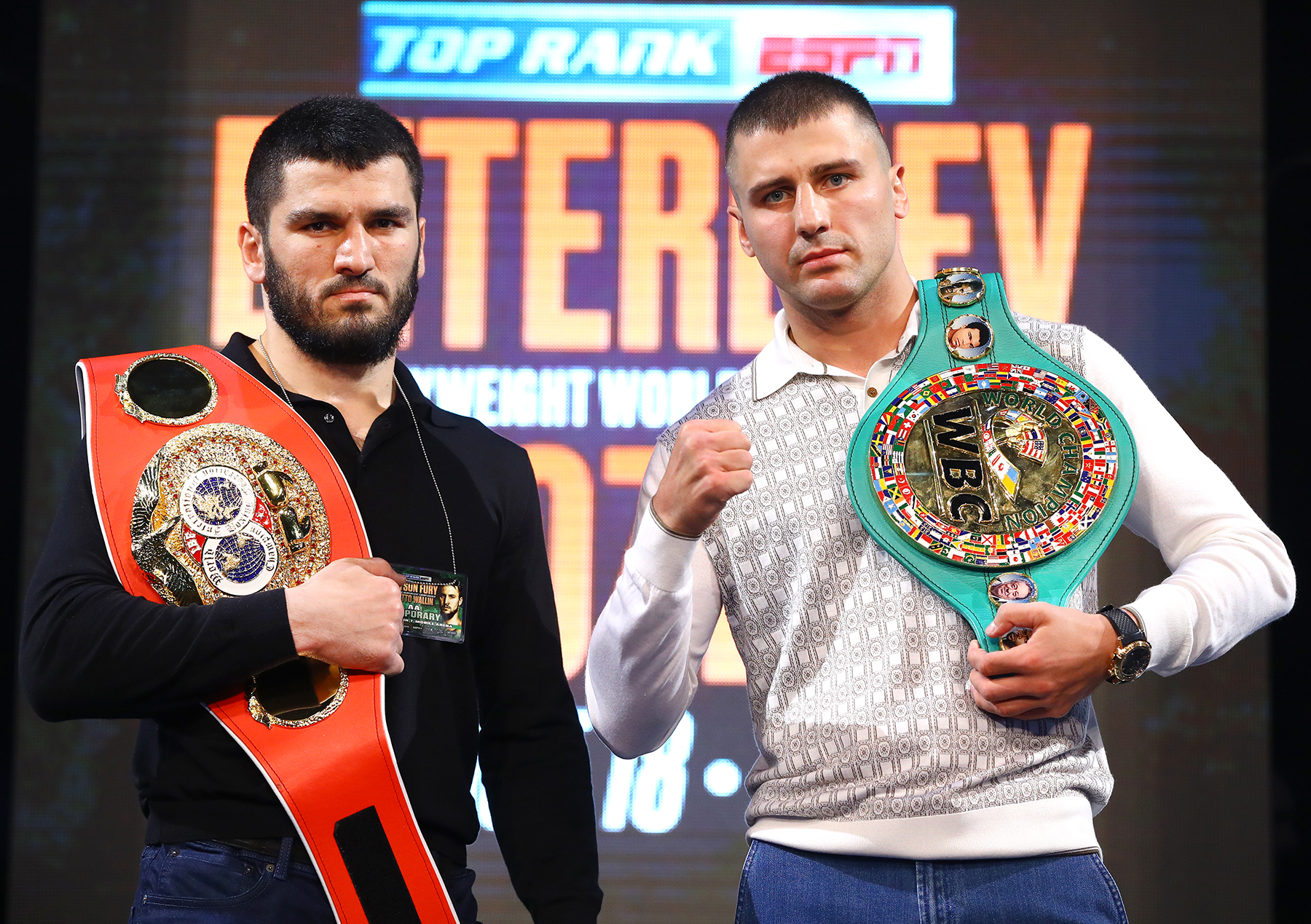 Beterbiev and Gvozdyk enter this can’t-miss clash with a combined record of 31-0 with 28 knockouts.

Gvozdyk-Beterbiev will headline a special edition of Top Rank on ESPN beginning at 10 p.m. ET/7 p.m. PT live on ESPN and ESPN Deportes.

“This could very well be the fight of the year,” said Top Rank chairman Bob Arum. “These are two evenly matched, undefeated light heavyweight champions. There is nothing better in the sport of boxing.”

“My first goal was to win a light heavyweight world title. Now, I want to unify the belts, and that mission starts with Artur Beterbiev,” Gvozdyk said. “This is going to be a spectacular fight, one that the fans will enjoy. The fans asked for this fight, and we will deliver. One thing I know is that I will be the unified champion. I have the best trainer, Teddy Atlas, in my corner. This is our third fight together, and under his guidance, I will continue to get better.”

“I wish to thank Top Rank and my opponent, Oleksandr Gvozdyk, for making this unification bout possible and giving the fans around the world what they want,” Beterbiev said. “This will be a great fight between the two champions who aspire to become the undisputed light heavyweight world champion. I am looking forward to stepping into the ring on October 18.”

Gvozdyk (17-0, 14 KOs) will be making the second defense of the title he won from longtime champion Adonis Stevenson in a come-from-behind 11th-round KO last December in Quebec City, Canada. He followed up the Stevenson win with a dominant fifth-round TKO March 30 over Doudou Ngumbu in Philadelphia, where a large Ukrainian contingent showed up to cheer on their countryman. Gvozdyk captured a bronze medal at the 2012 London Olympics, where he was teammates with current professional stablemate and pound-for-pound great Vasiliy Lomachenko. A five-year pro, Gvozdyk climbed the ranks with victories over established veterans like Isaac Chilemba, Yunieski Gonzalez and Nadjib Mohammedi.

Beterbiev (14-0, 14 KOs), a former Russian amateur star, has a come-forward, take-no-prisoners ring approach that has made him the only current world champion with a 100 percent KO ratio. He won the vacant IBF world title with a 12th-round TKO over Enrico Koelling, preserving his perfect KO record by stopping Koelling with 27 seconds left in the bout. His two title defenses have lasted a total of nine rounds, and most recently, he walked through longtime contender Radivoje “Hot Rod“ Kalajdzic in five rounds in the main event of the May 4 Top Rank on ESPN telecast.

Use the hashtag #BeterbievNail to join the conversation on social media.

Tickets are NOW ON SALE for the light heavyweight title unification between Artur Beterbiev and Oleksandr "The Nail" Gvozdyk on Fri, Oct. 18. This is going to be a GREAT one, don't miss your chance to see #BeterbievNail ...